(November 30, 2022 / JNS) More than 250 Israeli businessmen and entrepreneurs gathered on Tuesday for the Dubai Multi Commodities Center (DMCC) “Made for Trade” roadshow at the Tel Aviv Stock Exchange. Following the signing in May of a free trade agreement between Israel and the United Arab Emirates, the Emiratis wants to attract Israeli companies to set up shop in its DMCC free zone.

The Dubai Free Zone opened 20 years ago as a commodity exchange. It has since expanded to include high tech and other industries. Made up of more than 87 towers, both commercial and residential, in the heart of Dubai, it has 22,000 businesses.

Two hundred and fifty new companies are joining every month, said Marwan Saleh, director of sales and business development at DMCC. He detailed the many benefits of the free zone, including no corporate and income tax, a 10-year visa program, access to talent, financial support and low regulation. “You can open a business in five to 14 days,” he said.

Seventy-eight Israeli companies have already come to the Dubai Free Zone since the signing of the Abraham Accords in September 2020. Dubai is an extremely attractive business prospect given its role as an international transit hub, offering Israel a access not only to the UAE market, but to others as well.

Trade between Israel and the UAE (excluding software) reached $1.4 billion for the first seven months of 2022. Amir Hayek, Israel’s ambassador to the UAE, said in September that figure is expected to reach $2.2 billion by the end of the year. Diamonds make up about half of the trade.

While Israel’s high-tech industry was most often identified as the UAE’s main interest, DMCC Chairman and CEO Ahmed Bin Sulayem spoke about raw materials. Dubai, which has been operating a tea center for 17 years, re-exporting about 70% of the world’s teas, opened a coffee center about five years ago, realizing that “80% of countries that produce teas also produce coffee”, did he declare.

Sulayem said he came to learn more about coffee culture in Israel and met Uri Federman, CEO of Landwer Cafe. “Their brand of coffee has been around since the early 1900s, so there was a lot to learn from that,” he said.

Landwer Coffee was established in 1919 in Germany.

Sulayem revealed that a 2020 meeting at the Israeli Foreign Ministry convinced him to set up a water supply center, which the DMCC opened a few months ago. The idea was that once water was listed as a commodity, like gold, diamonds, or soy, no one would waste it. “Perhaps in the near future you will see a list of… water futures, water options, water point contracts.”

Sulayem also touched on the Dubai Gaming Center and Crypto Center, the latter accounting for 40% of crypto blockchain activity in the UAE. The crypto center offers state-of-the-art facilities and various operating licenses. “We had no problem with anyone buying and selling bitcoin as long as it was their own money. Once he used other people’s money, we had a problem. We want it to be regulated. We want all the controls in place,” he said.

During a panel discussion, Igal Nevo, former CEO of the Israel Blockchain Forum and currently an entrepreneur of a new gaming company, explained why the DMCC is so valuable for Israeli startups.

He opened the Blockchain Forum to convince the Israeli government of the industry’s potential, but closed it two years ago when he gave up hope of overcoming Israel’s regulatory hurdles and the state of Israel. risk-free mind of government authorities. He said the UAE, through its DMCC Free Zone, provides the trust and infrastructure that startups need. For a business looking to expand, Dubai is the perfect place, he said. 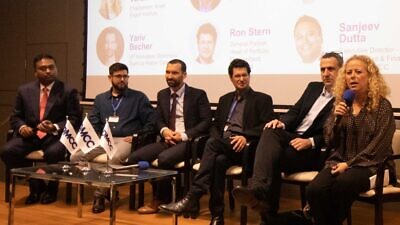 A panel discussion during the DMCC roadshow at the Tel Aviv Stock Exchange, November 29, 2022. Photo by David Isaac.

After the conference, Nevo told JNS that Israel should look to the Dubai Free Zone as a model, a place where a company can test its proof of concept (POC), finding out if its idea works in the real world. “Israel is very good at innovation technology in all areas. We are the tipping point of any new industry. But ultimately, we need a place to do our POC. We don’t really have a place to test our technology,” he said.

Businesses need regulatory relief and infrastructure to grow, which the UAE understands. “If Israel does not provide it, it will remain a start-up nation. It will never be a growing nation,” he said. “We will always be in first or second gear. In third gear, we are going to relocate the company abroad.

He said the Abraham Accords could have an unintended benefit. They paved the way for Israeli companies to play in the Dubai sandbox, to test their concepts. “We may have to take this little detour for Israeli officials to see what regulations are working.”

“Israeli officials are smart, smart, up to date, but they have no incentive to change. It’s going to take time,” he said. “But innovation is contagious, like a pandemic. Once you start thinking about innovation, you always think about it. Eventually, in five to 10 years, Israeli technology will be part of the thinking of the Israeli government.

Meanwhile, Nevo hasn’t decided where to take his gaming company. “It will either be Dubai or the United States,” he says.