The new law, which came into force in October, recognizes the right of children to obtain birth certificates in the absence of their father 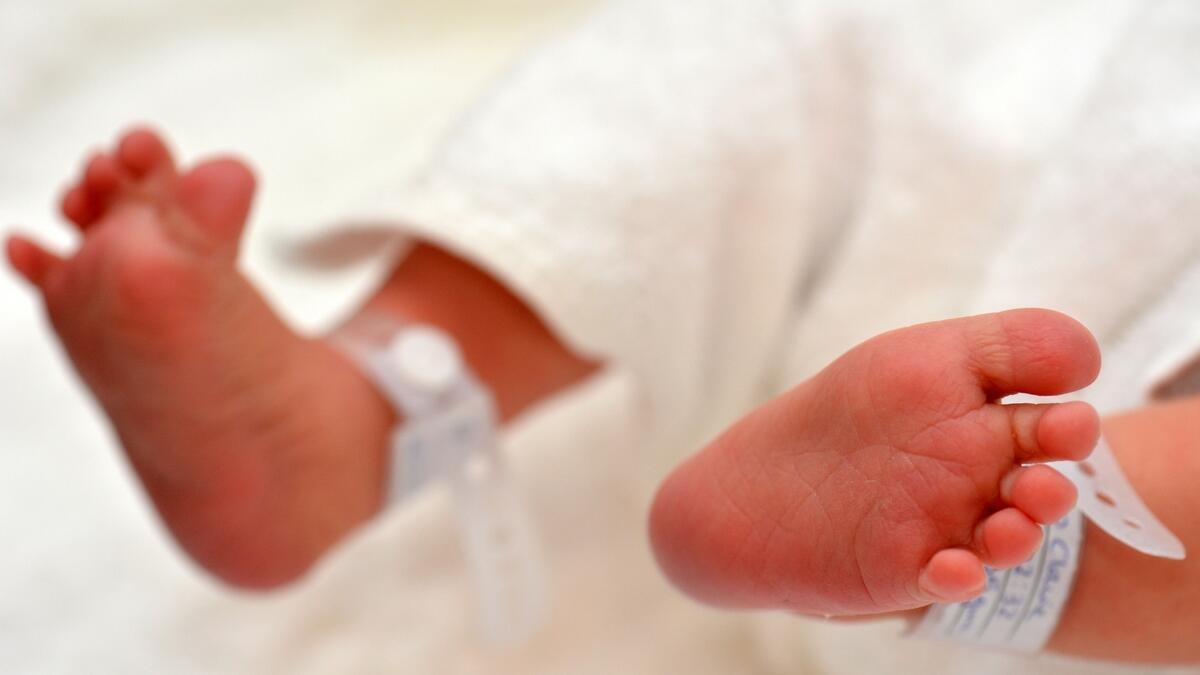 Birth certificates can now be issued to children whose fathers are unknown, following the implementation of new UAE law.

The new federal law was signed into law by the President, His Highness Sheikh Mohamed bin Zayed Al Nahyan, under Executive Order Number 10-2022 regulating birth and death registration in the United Arab Emirates.

The law, which came into force in October, recognizes the right of children to obtain birth certificates, regardless of their parents’ marital status and whether or not their father is known.

Mothers can now register these children by submitting their papers to the judicial authorities. A legal expert shared a form now available in Abu Dhabi: 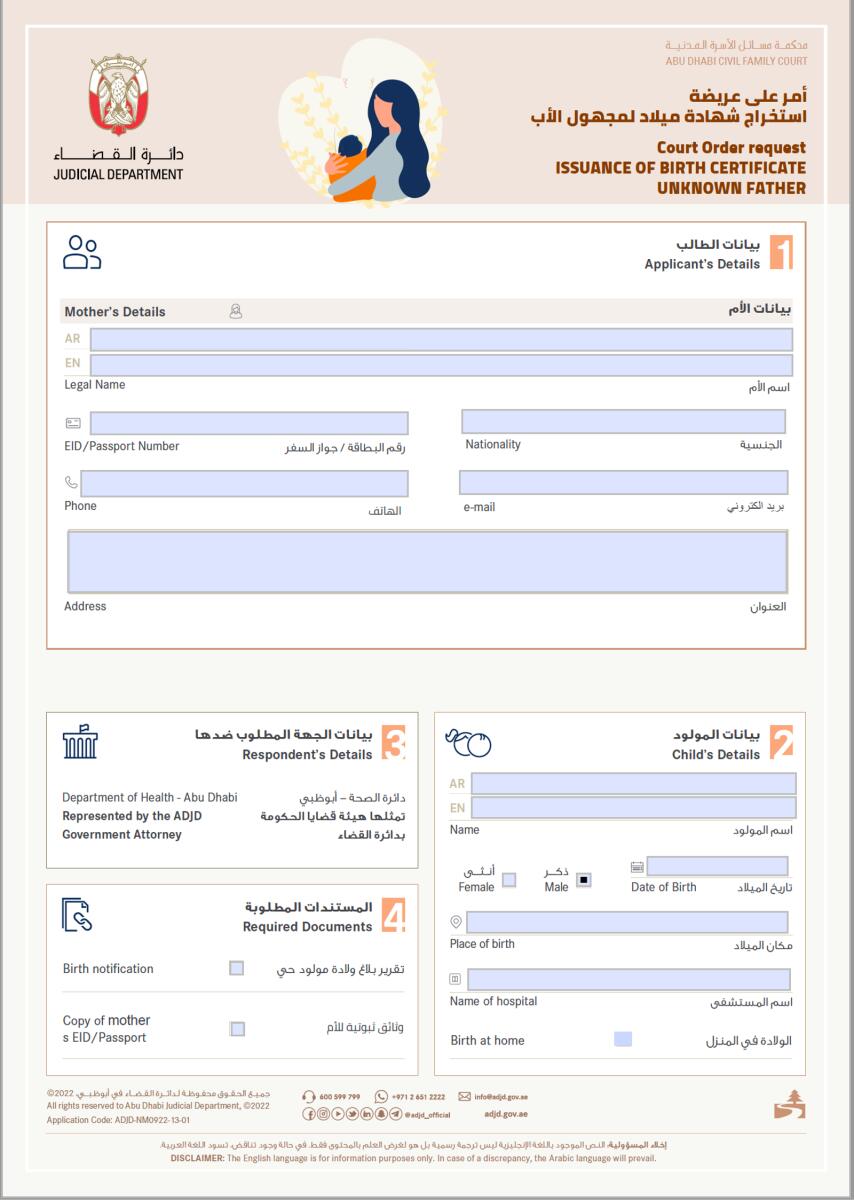 Under section 11 of the law, all mothers need to do is declare that they are the mother of the baby and submit the claim to court, according to Hesham Elrafei, a legal expert in the United Arab Emirates.

“The court will issue the order in a few days to the Ministry of Health to issue the birth certificate,” he added.

Based on the Abu Dhabi Judicial Department’s two-page birth registration form, the mother only needs to provide two required documents: the birth certificate and a copy of her identity card or his Emirates passport.

On the second page of the Court Order Request, the mother must also indicate why she is making the request: 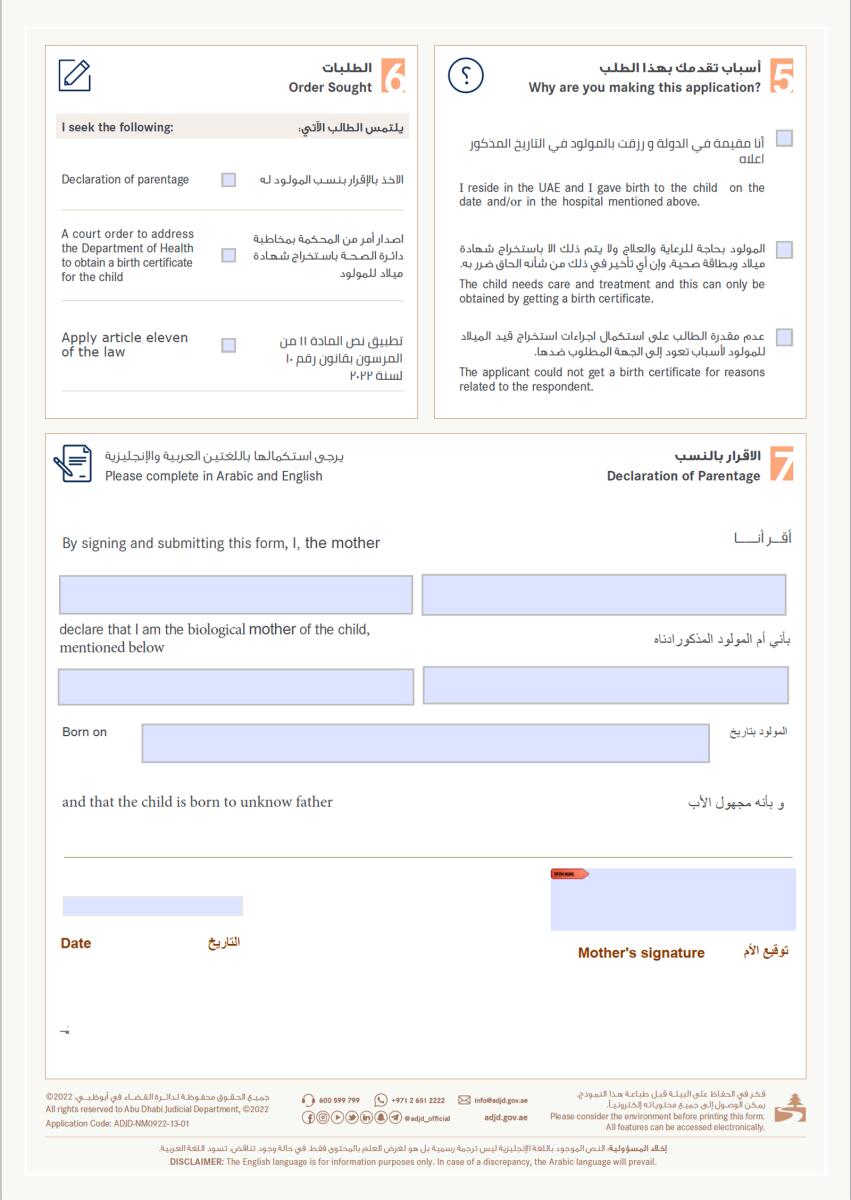 Elrafei said the new law regulating birth registration can be seen as “a major legal development in the history of the Arab region”.

“It is the first time that an Arab country recognizes the right of a single mother to register her baby if the father is unknown,” he said.

“Laws in the UAE are enacted to make people happy and to make life easier for both the economy and the individual. From civil marriage law to no-fault divorce to golden visa, you can’t find this anywhere else in the area.”

Marriage is no longer an obligation

Elrafei pointed out that the law does not look at how the baby was born, or if its parents were married.

“The law simplifies birth registration and takes a liberal and progressive approach by simply saying that children must be registered at birth. A child has the right to their own identity, the right to the best possible health care, the right to education,” he said.

Under section 7 of the law, marriage is no longer a precondition for the registration of a child. This was implemented in Abu Dhabi in 2020 and later in the Civil Marriage Act in 2021.

We also note that the law used the terms “mother” and “father” and not “husband” and “wife”, according to the expert.

“This is still a problem in other Sharia-based jurisdictions in the region, where a baby born out of wedlock to a known or unknown father is denied a birth certificate and will live as an undocumented child. As a result, this baby does not exist before the law, which means he will be deprived of the right to education, medical care and travel,” Elrafei said.

Abu Dhabi had earlier this year implemented the new Family Law, which regulates personal status issues for foreigners, including civil marriage, divorce, joint custody of children and financial rights. It applies to all expatriates, non-residents and tourists, regardless of their religion, as long as their country of origin does not apply Sharia in family matters.

Secular law does not apply to Muslims in the GCC, Arab nations and other countries, such as Pakistan, where Sharia law is enforced.

Under the new civil marriage regime, secular law allows expatriates, tourists and non-residents to marry in Abu Dhabi. The service is provided only by the capital of the United Arab Emirates and is available exclusively in the region. It gives tourists a chance to obtain civil marriage certificates.