Smaller than the F-150 but no less fun

The demise of the Fiesta and Focus in the United States marked the end of Ford’s longstanding but never realized ambition to create a “world car” that could succeed in all world markets. Perhaps Ford should have focused on a “global truck” instead, a niche that the ranger seems to have reached. The Ranger is sold in no less than 180 countries. The outgoing version was the most popular pickup in Europe, where we had our first experience with the highly anticipated new Ranger Raptor.

The Euro version has a lot in common with the future American Ranger Raptor, which we hope to see next year, featuring the same styling and gravity-defying suspension with internal bypass shocks made by Fox Racing. Beyond the fact that the Rangers sold in Europe are produced in Thailand while our version will be built in the good old USA, the major difference is that the American Raptor is about to get a more powerful engine.

This is because Europe is entering its own era of malaise. There, the Ranger Raptor gets a detuned version of the 3.0-liter twin-turbo V6 from the Bronco Raptor, the pickup’s engine strangled by the need to meet tough new emissions standards. In Australia, where the Ranger Raptor was first launched, its V-6 produces 392 horsepower and 430 lb-ft, but in Europe it will produce 288 horsepower and 362 lb-ft. We’ll have to wait for US specs, but it seems certain our Raptor will have at least as much power as the Australian version – and maybe the Bronco Raptor’s 418 horsepower and 440 lb-ft. A 10-speed automatic transmission with a two-speed transfer case, as well as locking front and rear differentials, will be standard in all markets.

The new Ranger’s fresh hardware sits on the same T6 platform as the outgoing truck, and the Raptor uses a beefed-up version of that ladder frame. From the front, it really does look like a baby F-150, with LED headlights pushed to the edge of the body and an equally screaming all-caps FORD grille motif. Like the F-150, it also has plastic wheel arch extensions and a wider track. Although huge by European standards, the Ranger Raptor’s 211.0-inch overall length and 79.8-inch width make it 21.6 inches shorter than the F-150 version and 7.0 inches narrower. A Crew Cab is the standard configuration in Europe and features a 61.6-inch cargo area.

The addition of microfiber panels and colorful accents elevate the Raptor’s cabin over that of the regular Ranger, but the plastics remain tough and utilitarian. The 12.4-inch digital instrument cluster and 12.0-inch portrait-oriented center touchscreen looked good. Ford’s SYNC 4A infotainment system works clean and intuitive, though we welcomed the continued presence of physical controls for heating and ventilation.

The Raptor’s center console features a chunky shifter with a button on the side that engages manual mode – manual shifting is done via paddles on the steering wheel. A rotary dial selects drive modes and controls the transfer case, which has 2H, 4H, 4L and 4A settings, the latter automatically sending power to the front axle when needed.

On-road refinement was very impressive considering the Continental General Grabber A/T tires our truck wore. Fox Racing shocks vary damping force based on both wheel travel and an adaptive valving, which means the ride at everyday speeds is plush and compliant. Noise isolation proved just as good at highway speeds, with the Raptor’s cabin remaining quiet when cruising at 75 mph in Normal mode – an unexpected virtue.

Steering weight feels heavier than in the F-150 Raptor, even in its lightest setting, but offers little feedback. Not much to say given the limited ability of the front tires to provide lateral grip on asphalt. The Ranger tracks straight and doesn’t wander, but while it feels stable at speed, it has little appetite for tighter turns. It doesn’t take much enthusiasm for the front to push wide and the rear axle to struggle for traction. 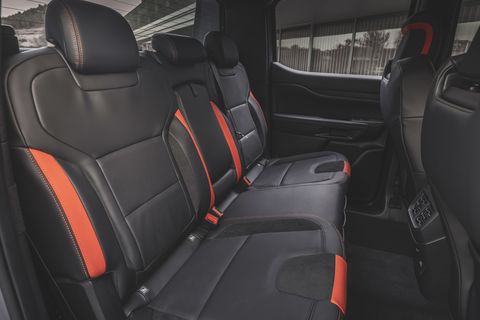 Although much faster than the last-generation Ranger Raptor sold in Europe – which used a four-cylinder diesel engine and took over 10 seconds to hit 60mph – the new one still seems far from fast. Ford of Europe quotes a sprint from zero to 62 mph in 7.9 seconds. The transmission’s harsh reactions in Drive didn’t help boost confidence for passing moves, either. Selecting Sport mode improved responses, but also added artificial weight to the electric power steering and introduced a buzzing exhaust note.

The Raptor’s exhaust has four different modes, including Normal, Sport, and a new quiet setting for quiet starts. There’s also a Baja mode that’s so loud it comes with a warning on the dash that it’s for off-road use only.

Driving the Ranger Raptor through a demanding off-road course quickly proved to be where its heart truly lies. It feels like a smaller version of the F-150 Raptor, slower but more maneuverable and yet just as adept at tackling serious bumps at speed. The Ranger has 10 inches of wheel travel up front and 11.4 inches in the rear, which is less than the F-150 Raptor, but the engineering team says the smaller truck’s shocks work. stronger. Sensors monitor wheel movement at every turn, so the Raptor’s brain knows when its tires have left solid ground, how hard it’s stiffening the shocks to their firmest setting to prepare for impact. Hitting a big bump at high speed proved the truck could fly and, more importantly, land without excessive drama.

Yet it was on technically more difficult terrain that the Ranger Raptor impressed the most. Ford’s claim of 10.4 inches of ground clearance and a 32-degree approach angle might not come close to the Bronco Raptor’s 13.1 inches and 47 degrees, but the pickup’s numbers are better than a Land Rover Defender 90 with coil springs. The Raptor also has a Rock Crawl mode that automatically maintains a creeping speed and takes it down a steeply sloping dry creek bed without any throttle input. The electronic-locking front and rear differentials can also be engaged and disengaged quickly, although the icons controlling them on the touchscreen are small and difficult to locate when the truck is bouncing over rough terrain.

The Ranger Raptor is smaller than its F-150 sibling, and the European version is considerably slower, but it feels no less of an experience when driven hard over demanding terrain. We await the arrival of our own returned version with great enthusiasm.