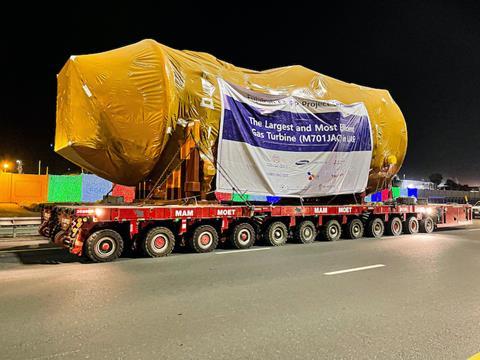 Assigned by Samsung C&T Corporation, MammoetThe scope of the contract included receipt of cargo, transportation, as well as lifting and installation of power plant components.

Among the heaviest units carried were three gas turbines, each weighing 528 tons and measuring 13.6 mx 6.1 mx 6 m, and three gas turbine generators which measured 11 mx 5.8 mx 5.2 m and tipped the scales at 395 tons. A total of 106 components were transported to the plant.

After careful planning and obtaining approvals and permits, the cargoes were transported by road avoiding the inland mountains. Along the route, an overhead bridge with a maximum clearance of 7.3m meant that the gas turbines, which required a clearance of 7.5m, were loaded directly onto the trailers without the use of standard transport beams. This reduced the overall transport height by around 30cm, but meant that the cargo could not be unloaded onto stools for temporary storage and had to be lifted from the trailers and installed directly on arrival at the site.

According to Mammoet, Fujairah F3, which is located between the existing water and power plants of Fujairah F1 and Fujairah F2, will be the largest independent combined cycle power plant in the United Arab Emirates.